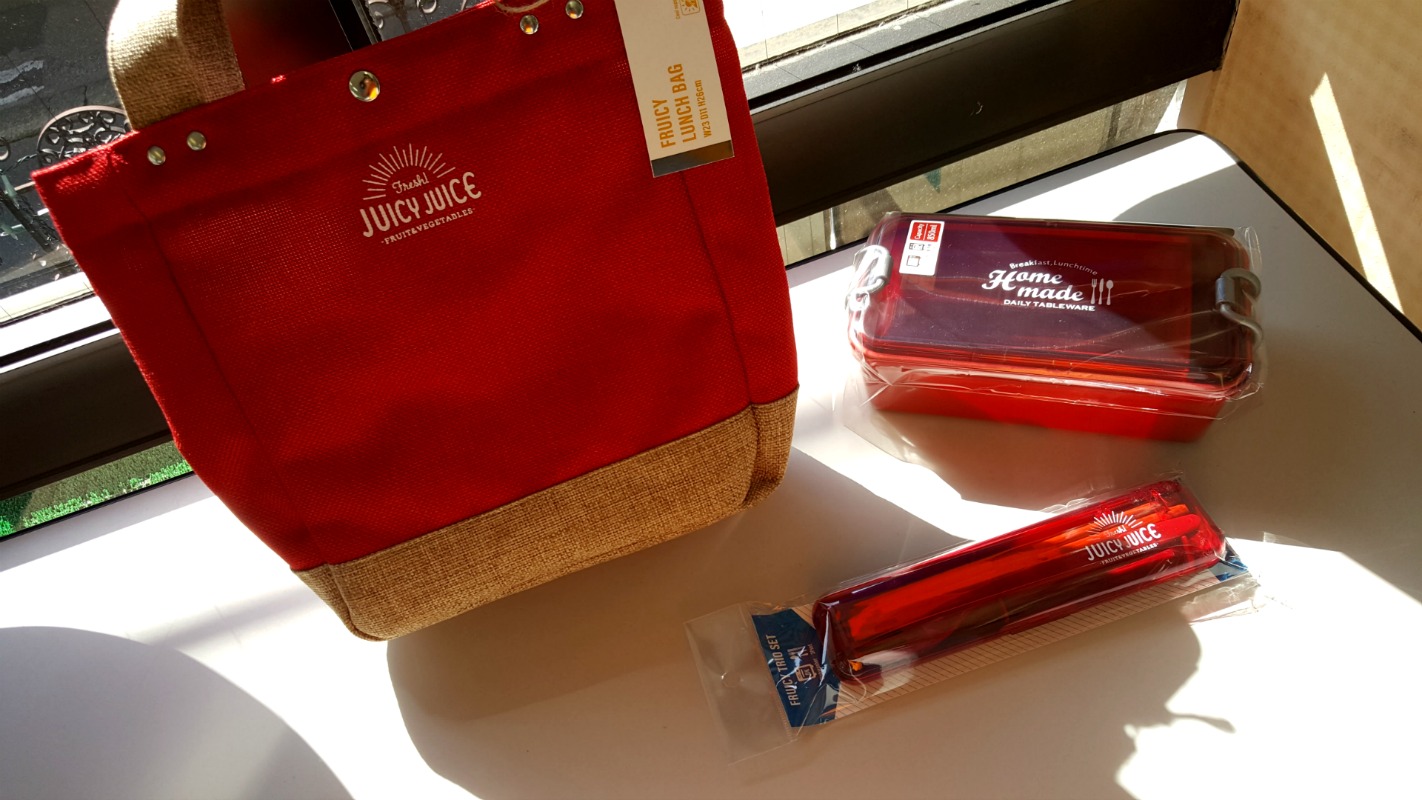 Golden Week is just around the corner, and people across Japan are anxiously waiting for the holidays to begin. I’ll be traveling to Okinawa for vacation at the end of the month, so I stopped by a department store during my lunch break today just to see what kind of travel goods they had in stock.

I didn’t get very far, because at the top of the escalator was a very vibrant and beautiful display of new bento boxes for adults. I made a commitment this year to cook more and try to pack my lunches for work.

I’ve been using generic microwavable clear containers up until now, but thought it wouldn’t hurt to invest in a nice bento set that I could also take with me to Okinawa. Right?

I swear the colors and designs of bento boxes become more enticing each year. Wonderful lime greens, alluring cherry reds, and Snoopy themed boxes galore! Yes, you read that right. For some peculiar reason, Snoopy goods are very popular with adults in Japan, but I’m not complaining.

The typical gray and black bento boxes aimed towards salarymen seem to be diminishing in numbers over the years in favor of more stylish and visually appealing boxes that are suitable for everyone.

I wanted something that looked sophisticated and appropriate for a woman in her 30s, but still bright and fun at the same time.

Bento boxes targeted towards women tend to be significantly smaller than those marketed at men. In the past, it was much harder to find really aesthetic bento boxes that were above 500ml in size.

They could only really hold a few scoops of rice, and a small side of meat and vegetables. I’ve never been one for the really cutesy designs like Hello Kitty or Gudetama. It’s not because of the way that they look, or because I have anything against the characters, but the sizes and shapes tend to be impractical. I always end up starving within a few hours of eating something so small!

A new brand that I came across today was one called Juicy Juice. They had a nice range of long bento boxes that are shaped more like the traditional ones. There also had some that were shaped like bowls, with layers inside that are great for separating noodles, salads, and donburi dishes such as beef over rice.

I think the bowl shaped bento boxes look really nice, and I had one in the past that was a different brand. But, the container warped quite a bit after using it a few times in the microwave, and it didn’t fit together after only a couple months.

The Juicy Juice brand might not have this problem, but I decided to go with a rectangular bento box, because they also have more tote options.

The Juicy Juice red tote is what actually sold me. I wish I could describe just how nice it feels. The outside has a thick canvas texture that feels very sturdy and high quality. The inside is well insulated and fastens shut with a button.

If there’s one thing I could change about the tote, I would prefer for it to have a zipper to completely seal it and help maintain the temperature. My commute to work is pretty short though, so it’s not much of an issue, but it might be for others who will be outside longer in the upcoming summer heat.

In addition to the red tote, I picked up a matching chopstick, spoon, and fork set. These fit nicely together in a small case, and I was glad that this set included wooden chopsticks as opposed to plastic ones.

The plastic ones last longer and look better, but the truth is that most of them are also harder to eat with. The tips tend to be too slippery, and I can’t count how many times I’ve dropped food a few inches from my mouth, because the plastic chopsticks didn’t have enough traction.

You can find some with rigged ends, but they usually have to be bought separately.

I also picked up a shockingly red bento box to go with the tote and cutlery. It has a different name printed on the front of it, but it turns out they’re all part of the MYKONOS lunch sets. It has a capacity of 850ml, and the color is so irresistible that I was standing in line and paying for it before I realized what was happening.

The quality is exceptionally nice, and I’m sure that it’ll last me quite some time.

I’m sure you’re all tired of me rambling about what I bought, and you’re wondering how you can get your hands on your own. For those of you in Japan this is fairly easy. Just head to your nearest Loft, Tokyu Hands, Ito Yokado, or any other department store to see what new designs they came out with for this summer.

Most of my readers, however, are in the US, and if you’re one of them, you’re in luck! You can order Japanese bento boxes online, and have them shipped directly to your home through Amazon.

There’s one small problem though.

The US Amazon site doesn’t have as big of a selection to choose from as the Japanese one.

The same is true for Amazon sites in other countries.

Anyone can use the Japanese Amazon site in English by changing the settings at the top of the menu.

However, you won’t get as many search results as you would if you searched in Japanese. Keeping this in mind, here are some helpful suggestions on what to look for if you’re a non-Japanese speaker, but want access to the same bento sets.

Choose The Right Bento Box For You

First you have to decide how big of a meal you’ll want to pack in your bento box. A 500ml box could roughly hold the equivalent of a happy meal from McDonald’s. Maybe just a little bit more. If this sounds filling enough for you, here are a few different styles you should check out:

If you want something a bit larger, then I suggest browsing some of the bento bowls or “2 tier” boxes. These usually stack together and snap in place. Be careful, most of the lids aren’t microwavable, so be sure to remove them before reheating your food!

Most Japanese bento boxes are designed to hold food that is room temperature or cold. It’s not a good idea to store warm or hot foods in these, because moisture will get trapped, and they’ll become a great breeding ground for harmful bacteria.

There are frequently stories in the news about people becoming sick (especially school children) from eating lunches stored in boxes that weren’t allowed to properly cool before being sealed. If you’re someone who likes to pack a lot of hot meals, then I suggest staying on the safe side and using something like Thermos instead.

I might add more to this article at a later date, but it’s already 2am and I need to get some sleep before work tomorrow! If you thought this information was helpful, please let me know!

If you have any questions, feel free to ask them in a comment. I’ve been getting so much awesome feedback and support since starting this blog, and I really appreciate everyone that has left a reply. Until next time!