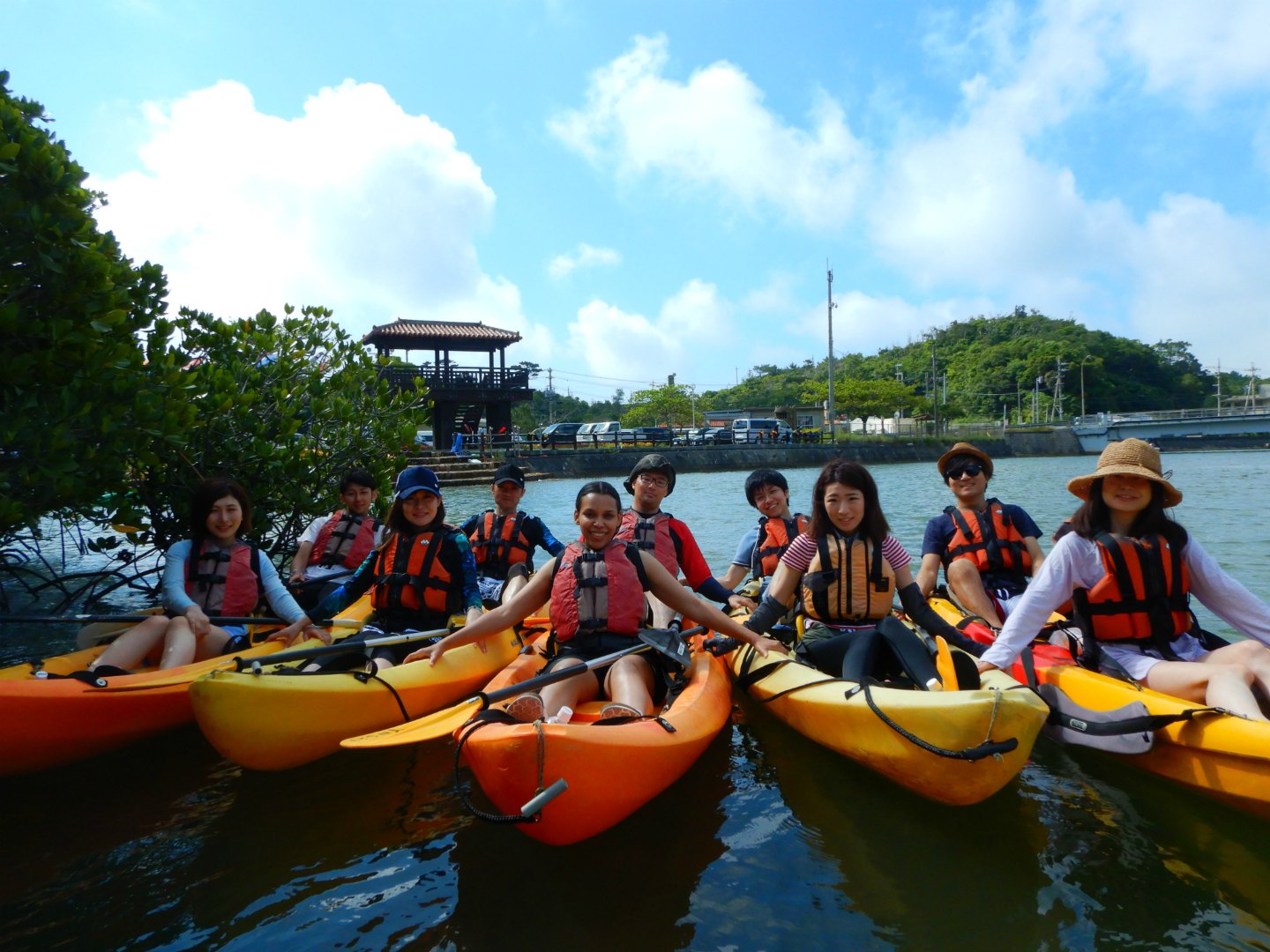 Kayaking Through the Yanbaru Mangrove Forest in Okinawa

Have you always wanted to try kayaking, but felt intimidated because you’re a complete beginner and worried it might be difficult? Me, too! The Yanbaru Mangrove in Okinawa is a fun and safe place to go if you want to experience kayaking in Japan. I was a bit worried and nervous before I went, but it turned out to be the most exciting and memorable experience of our trip!

How to Prepare for Kayaking in Okinawa

The first step to kayaking is to choose and register with a school that offers tours of the Yanbaru Mangrove. There are actually a few, but the one that we used was called the Yanbaru Nature School. You can set up a tour reservation on their website, but please note that they only offer courses early in the morning! The reason for this is because the tide goes out at around noon, and all of the water leaves the mangrove, and exposes the ground below.

So, if you want to go kayaking, it’ll have to be the first activity you plan for the day, and expect to get up really early. We had to wake up at 5:00 a.m. in order to make the two hour drive to get there. Unfortunately, your only option for getting to the Yanbaru Mangrove is to rent a car and drive. There aren’t any buses that’ll go, and the monorail won’t even get you close.

READ: Surprises While Getting Around Okinawa Without a Car

I suggest registering at least two weeks in advance. Especially if it’s during the holiday season. The tour that we went on was only offered in Japanese, but I think you can understand most of the instructions even if your Japanese isn’t that great. They’ll show everything in a very clear and simple manner. So simple, in fact, that even children in elementary school are allowed to join and participate!

The Yanbaru Mangrove tours were offered in three different courses (A, B, and C), depending on the level of difficulty you want to experience. We went with the A course, because it is the easiest, and because…

Now, that might not sound like such a big deal, because everyone is given a life vest. But, I was terrified that the kayak would flip over, and I’d somehow get trapped underwater. That was a really silly thing to worry about. Even a complete beginner like me who can’t swim can have a totally easy and exciting time.

So just to recap, you need to:

What to Take with You When Kayaking in Okinawa

Some of these may sound like a no-brainer for anyone who already has experience kayaking or doing other water sports and activities in Okinawa or other parts of Japan. I wasn’t exactly sure of what all I needed before going, so I compiled a short list of things I recommend you take or that I wish I had when I went:

The instructors actually suggest that you take a hat and bottle of water with you, because you’ll be out in direct sunlight for at least 3 hours. If you’re someone that gets sunburns easily, I recommend taking a small bottle of sunscreen onto the kayak with you, and reapplying it throughout the tour.

READ: How Much Spending Money You’ll Need per Day in Japan

Most of the Japanese people that went with our group wore long sleeves, and some even completely covered their legs. This is a good option if you have fair skin, and you don’t have to worry about feeling out of place for covering up to protect your skin from the sun. I’m a brown complexion, and thought I would be fine.

I covered myself from head to toe in sunscreen, but still ended up getting burned a bit on my forehead after sweating it off by the end of the tour.

What to Do Before Kayaking in Yanbaru Mangrove

When you first arrive at the kayaking school, you’ll be asked to sign in and pay the course fee. It was 5500 yen ($55 USD) for each adult when we went. You’ll be given a key for one of the lockers to keep your valuables in, and will be asked to park your car in a lot that is a bit of a walk away. You should put a towel, change of clothes, and any toiletries you may need in the locker.

There is a changing room for you to use to switch into your swimwear. There is also a shower for you to use afterwards. Once you’ve gotten ready, you’ll meet your instructor and the rest of the group.

It seems that the A course is really popular for couples that want to try kayaking together. There were four other pairs in addition to us, and we were all asked to introduce ourselves. The instructor asked us what our names were, where we were from, and how many times we’d been to Okinawa and kayaking.

READ: Where to Find the Best Soba in Okinawa

My boyfriend and I were the only pair that was kayaking our first trip, and the instructor told us that we’re extremely rare! She said that most people stick to the Naha area the first time they visit, and don’t venture out until the second or third time.

I didn’t know whether to feel proud that we were adventurous or crazy!

You’ll be given a paddle, and then the instructors will demonstrate how to correctly hold them and get on the kayak. For about 15 minutes we sat at the bank as two male instructors showed us how to paddle forwards, backwards, and turn.

It seemed simple enough, and after making sure no one had any questions, they gave us each a kayak, and had us to jump on. Not literally jump, but you catch my drift!

After boarding our kayaks, the instructors challenged us to go to one of the mangrove on our own and back  without any additional directions, just to get a feel of it. Some couples made it to the end and back without any problems, but there was one relatively young and cute one that just kept spinning in circles and getting stuck along the bank.

The water was freezing cold when my boyfriend and I got into our kayak and made our way down part of the mangrove and back. My heart was racing a bit when we first got started, as my fears of tipping over and getting dumped into the water returned, but then I realized we could actually see to the bottom and it wasn’t that deep.

If I stood in the water, it would probably come up to about my shoulders, but that was at the highest point of the tide.

After about 15 minutes, the female instructor had us all gather together, and we began our tour as a group.

Learning About the Yanbaru Mangrove

The tour was more educational than I thought it would be. The instructor taught us about the history of the mangrove, and the life cycle of various plants that can be found there. We stopped several times along the banks to take a closer look at the roots, seeds, and tiny little crabs that inhabit the area.

You might not realize it at first, but the place is teeming with crabs! Most of them blend in with the environment, but once you spot them and see just how many are crawling around the roots, your skin may also begin to crawl. They’re harmless, but look like large creepy spiders. Yuck!

READ: How Okinawa Is Different From Mainland Japan

Paddling along the mangrove is extremely peaceful and relaxing. You’ll notice the water get lower and lower as noon approaches and the tide slowly leaves. After almost two hours of touring, the water only appeared to be about knee level.

We had to quickly make our way back to the school before it became too shallow, and stopped for a short water break and chance to use the restroom.

This is also a good chance for your to reapply your sunscreen and refill your water bottle.

Paddling out to Sea

For the latter part for our tour, we followed the instructor out to the nearby sea. The waves quickly became noticeably rougher and louder, so she didn’t stop us to talk as frequently as she did at the mangrove.

The kayak bobbed about the waves much harder than I was mentally prepared for, and at one point I said in a small voice to my boyfriend that I was scared. Luckily, he kept paddling so we stayed with the group, and there was no turning back.

My arms were trembling a bit from both fatigue and fear, but once I got over the mental hurdle, it started to become very exciting.

It was extremely hard paddling against the waves, but it also felt like we were finally on the adventure we set out for. The waters of Okinawa are stunningly blue and green, and the beaches are simply beautiful. The skies were clear, the breeze felt great, and the water splashing on us felt refreshing.

When it was time to head back, I felt both triumphant and exhausted. My squishy arms gave up about halfway back, and my boyfriend had to paddle us the rest of the way.

The End of the Kayaking Tour

Once we were all done and got off our kayaks, we headed to the locker rooms to shower and change. The instructor took pictures throughout the tour, and did a great job to make sure to get shots of each couple up close.

She burned them all to a disc while we were cleaning up, and passed them out to us along with snacks while we rested. We ate sweets and chatted for a bit before saying our goodbyes and thanking her for a wonderful experience.

I’ll definitely want to go kayaking again sometime in the near future, and would highly recommend Yanbaru Mangrove for anyone else thinking about doing so.

After it was all over, we drove for about 20 minutes to a nearby restaurant, and ate some delicious Okinawan pork while talking about how great of a time we just had together.

I hope this post will inspire someone else to try it too!

What to Pack in Your Japanese Maternity Hospital Bag