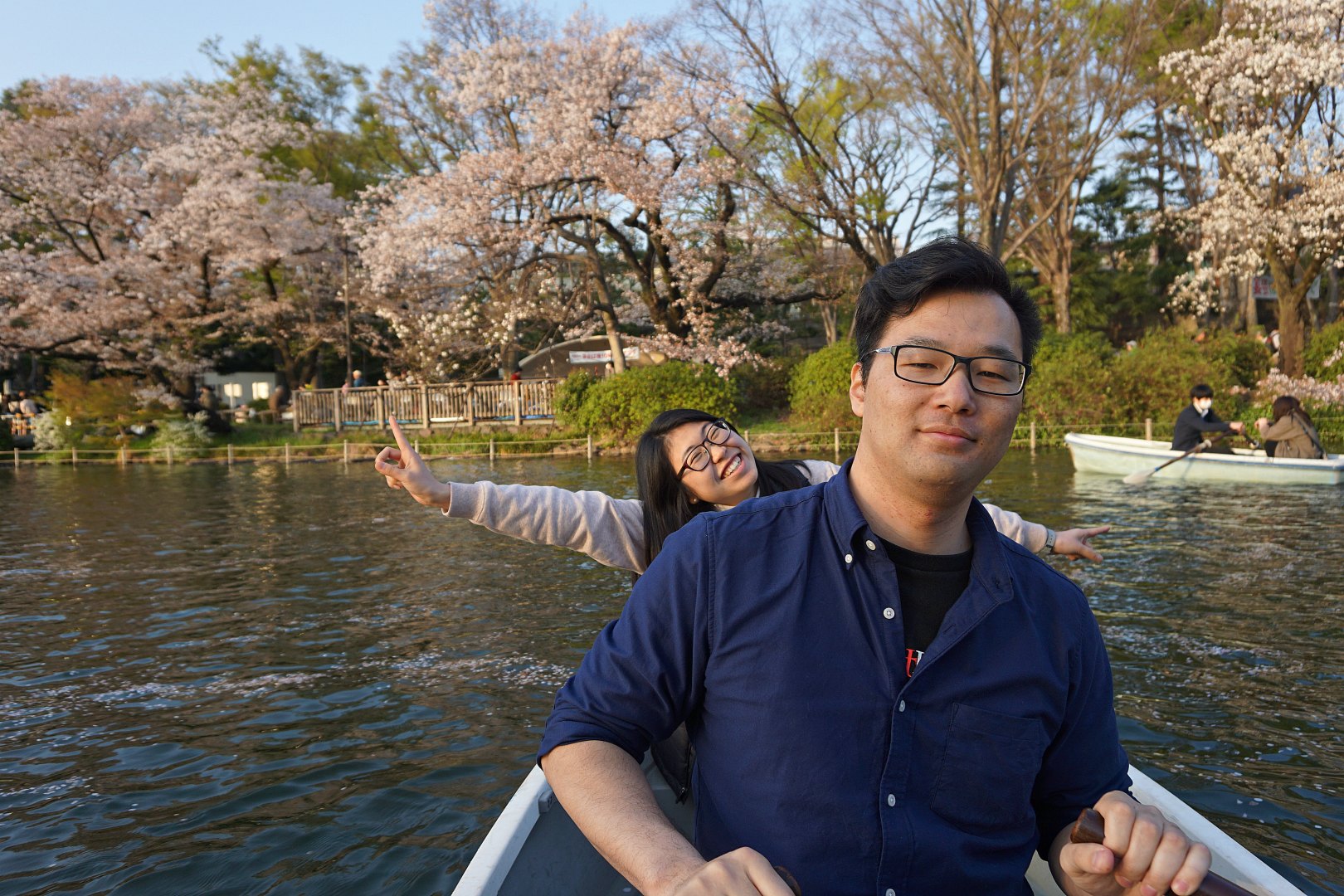 There were many ups and downs in my life over the past two years, but the last couple of months have made it all worthwhile. I have a solid group of friends, a wonderful boyfriend, and a lot of good memories I can look back on.

Cherry blossom festivals, also known as hanami (flower viewing) are famed for being a time to binge on delicious food, drink copious amounts of alcohol, and gawk at the amazing view of petals from above.

But, they’re also a time to stop and reflect on how fleeting life is, as the petals begin to fall after only a few short days.

Hanami is a reminder that we should take the time to appreciate what we have in that moment, for it could all be gone in a day, week, or month or two.

Why This Hanami was Special

My boyfriend and I started dating just a few months ago, and we’re still in the honeymoon phase of getting to know each other, and becoming acquainted with the other people in our lives. The previous weekend, I had the very intimidating experience of meeting his parents for the first time.

It was something I was hesitant to do, but an essential part of learning the dating culture in Japan, especially as a foreign woman.

I feared that his family wouldn’t accept me, because I’m not Japanese. I also worried that they would become frustrated or annoyed by my imperfect grasp of their language. All of those fears and concerns melted away as soon as I met them, and we were able to spend a pleasant evening together.

This past Saturday was my boyfriend’s turn to feel shy and awkward. We were invited by one of my coworkers to join her and a few others for hanami at Inokashira Park. He had met some of my friends before, when we both attended a pizza party that was held by my former roommate.

At the time we were asked to introduce ourselves to the newcomers, and he said he was my friend. I was caught off guard and began questioning myself if we were even dating or not. I wasn’t familiar with the ins and outs of dating in Japan, so I didn’t know if introducing your partner to others as a “friend” was common, or if he really thought of us as just that.

I waited a few days to ask my boyfriend about it, because I was starting to worry that perhaps our relationship wasn’t as serious as I thought. He reassured me that he thought of me as his girlfriend, and explained that he just panicked when he was put on the spot. Since then we’ve talked quite a bit about our relationship, and our plans to move forward together.

Getting to know some of my coworkers was the next big step, and I was excited that they’d finally get to meet him after months of me gushing about how great he is. We confirmed with everyone that we would both be attending, and woke up early Saturday morning to begin the preparations.

Preparing Food for the Hanami

My boyfriend was determined to bake something to share with everyone and make a good first impression. I tried to convince him that it wasn’t necessary, and told him that everyone else would probably just pick something up from the conbini (convenience store), but he wasn’t having it! He was going to bake something, and it was just matter of deciding what.

At first he suggested that we make some BBQ ribs, like the ones I made for his birthday the previous month. I informed him that the hanami organizer was vegetarian, and there were likely to be other vegetarians there as well. We made a few jokes about how he would end up making more enemies than friends if he brought an animal carcass smothered in sauce. No offense to all the non-meat eaters out there!

I tried to think about what would be more suitable to bring to a cherry blossom festival, and could be enjoyed by everyone. Then it dawned on me: what could be better than eating cherry pie under the cherry blossoms?!

I asked my boyfriend what he thought, and he said, “Good idea! You find the recipe!” And that was how I was volunteered to get up early and help bake them in the morning.

After mixing together some ingredients, and hastily filling up small pie crusts in muffin tins, we tossed our amateur concoctions into some containers and ran out the door. We were a few minutes behind schedule, but some how made it to Kichioji Station only four minutes late. Half of the group still hadn’t arrived, and the other half was lost somewhere amongst the sea of people.

Meeting Our Friends at Inokashira Park

We decided to head out to Inokashira Park with the few people we had, so we could find a spot to sit down and send them our location. It was my first time there, but I had seen it a few times in YouTube videos.

I had a hunch that it would be crowded, because many people were predicting that it would be the last chance to see the blossoms during the season. I wasn’t prepared for just how crowded it would be. Just getting to the park from Kichioji Station took a lot of effort as waves of people moved shoulder to shoulder at a snail’s pace.

It took us nearly an hour of walking to even find a place to sit down in a tiny little opening near the lake. From there we watched families, friends, and couples paddle along the water. Some were just inches from colliding, and others crashed head on.

I marveled at how none of them actually tipped over, and wondered how deep the lake must be. No one was wearing a life jacket, and some boats were manned by young students without any adults.

My friends laid down a sheet for us to sit on, and we all began pulling out our food and drinks that we brought to share. My boyfriend and I whipped out the cherry pies from the containers. Some of them were definitely prettier than others, but they all tasted the same, and we passed them around for everyone to try.

Cans were cracked open, snacks were eaten, and terrible jokes were created while playing Cards Against Humanity while sitting in a circle under the trees. Each time the wind blew, a flurry of pink petals descended upon us, and created the illusion of vibrant snowflakes.

Eventually, people began to move around the mat to catch up and talk with one another. We continued watching people paddle around the lake, until my boyfriend encouraged us to try it for ourselves.

I was a bit reluctant at first, because although it looked fun, I wasn’t keen on the idea of standing in line for an hour to get on one. He reassured me that it probably wouldn’t take that long, and convinced me and Yoshi to at least walk to the dock and check out the lines.

My boyfriend stopped at a restroom on the way to the docks. Yoshi and I continued walking, because it wasn’t much further ahead, but somehow we got distracted by ice cream. To the left was a little cafe with some tables miraculously unoccupied, so we did what any sensible woman would do, and stopped to get some ice cream!

I think Yoshi and I end up eating ice cream every time we hang out together, so it is becoming sort of a tradition for us. We got sidetracked while munching on our cones, until my boyfriend found and rejoined us a few minutes later. Then we headed back out towards the dock.

Surprisingly the line was quick, and we probably waited approximately 30 minutes. It cost 700 yen ($7) to rent a boat for one hour for 3 people. When it was finally our turn to board, I felt a wave of panic as it began to wobble.

Most people who are close to me already know that I can’t swim, and the thought of paddling out into a big open lake was somewhat terrifying.

We decided beforehand that Yoshi would get on the front, my boyfriend in the middle, and I would ride in the back to record the view. I was the last one to get one, and the attendant gave us a push off from the deck before I had a chance to protest.

The first few minutes of the boat ride were chaotic as people were drifting and paddling in every direction, and squealing while slamming into one another. I’ll admit that I saw my life flash before my eyes the first two or three times we hit someone, but the accidents became less frequent the further we got away from the dock.

I gradually calmed down and realized everything would be alright. That was when I was finally able to take in and savor just how amazing the experience was!

My boyfriend continued paddling, and somehow only managed to splash dirty water onto my face twice! We laughed and joked about the amount of duck poo I was inadvertently consuming, but he got better at paddling after a short while. I was glad that Yoshi was able to join us, and that the three of us shared the boat ride together.

I got a Line message from one of my coworkers asking how much longer we’d be gone, and that said most of them would be heading back home soon. We had been away much longer than expected, thanks to our small detour for ice cream.

My boyfriend paddled us back to the dock quickly, and we made it back to the mat just as the last two people were leaving.

All that was left were the two empty containers that held the cherry pies we made that morning. My boyfriend smiled and said that he was glad that everyone ate them.

Are you also dating someone in Japan? I would love to hear from other women about their experiences. The dating culture in Japan is a lot different than what I’m used to in America, and a lot of it is catching me by surprise. Let’s share these special memories together!

READ: My Experience With Racism in Japan